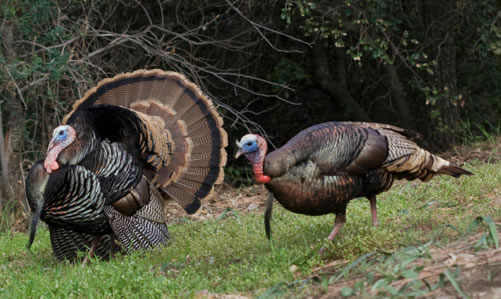 The wild turkey (Meleagris gallopavo) is native to North America and is the heaviest member of the diverse Galliformes. It is the same species as the domestic turkey, which was originally derived from a southern Mexican subspecies of wild turkey (not the related ocellated turkey). Although native to North America, the turkey probably got its name from the domesticated variety being imported to Britain in ships coming from the Levant via Spain. The British at the time therefore associated the wild turkey with the country Turkey and the name prevails.

Adult wild turkeys have long reddish-yellow to grayish-green legs. The body feathers are generally blackish and dark brown overall with a coppery sheen that becomes more complex in adult males. Adult males, called toms or gobblers, have a large, featherless, reddish head, red throat, and red wattles on the throat and neck. The head has fleshy growths called caruncles. Juvenile males are called jakes, the difference between an adult male and a juvenile is that the jake has a very short beard and his tail fan has longer feathers in the middle. The adult male’s tail fan will be all the same length. When males are excited, a fleshy flap on the bill expands, and this, the wattles and the bare skin of the head and neck all become engorged with blood, almost concealing the eyes and bill. The long fleshy object over a male’s beak is called a snood. When a male turkey is excited, its head turns blue; when ready to fight, it turns red. Each foot has three toes in front, with a shorter, rear-facing toe in back; males have a spur behind each of their lower legs.

Despite their weight, wild turkeys, unlike their domesticated counterparts, are agile fliers. In ideal habitat of open woodland or wooded grasslands, they may fly beneath the canopy top and find perches. They usually fly close to the ground for no more than 400 m (a quarter mile).

Turkeys have many vocalizations: “gobbles”, “clucks”, “putts”, “purrs”,”yelps”, “cutts”, “whines”, “cackles”, and “kee-kees”. In early spring, male turkeys, also called gobblers or toms, gobble to announce their presence to females and competing males. The gobble can carry for up to a mile. Males also emit a low-pitched “drumming” sound; produced by the movement of air in the air sack in the chest, similar to the booming of a prairie chicken. In addition they produce a sound known as the “spit” which is a sharp expulsion of air from this air sack. Hens “yelp” to let gobblers know their location. Gobblers often yelp in the manner of females, and hens can gobble, though they rarely do so. Immature males, called jakes, often yelp.

Wild turkeys are omnivorous, foraging on the ground or climbing shrubs and small trees to feed. They prefer eating hard mast such as acorns, nuts, and various trees, including hazel, chestnut, hickory, and pinyon pine as well as various seeds, berries such as juniper and bearberry, roots and insects. Turkeys also occasionally consume amphibians and small reptiles such as lizards and snakes. Poults have been observed eating insects, berries, and seeds. Wild turkeys often feed in cow pastures, sometimes visit back yard bird feeders, and favor croplands after harvest to scavenge seed on the ground. Turkeys are also known to eat a wide variety of grasses.

Turkey populations can reach large numbers in small areas because of their ability to forage for different types of food. Early morning and late afternoon are the desired times for eating. Â A hen with juveniles.

Occasionally, if cornered, adult turkeys may try to fight off predators and large male toms can be especially aggressive in self-defense. When fighting off predators, turkeys may kick with their legs, using the spurs on their back of the legs as a weapon, bite with their beak and ram with their relatively large bodies and may be able to deter predators up to the size of mid-sized mammals. Hen turkeys have been seen to chase off at least two species of hawks in flight when their poults are threatened. Occasionally, turkeys may behave aggressively towards humans, especially in areas where natural habitats are scarce. They also have been seen to chase off humans as well. However, attacks can usually be deterred and minor injuries can be avoided by giving turkeys a respectful amount of space and keeping outdoor spaces clean and undisturbed.

The range and numbers of the wild turkey had decreased at the beginning of the 20th century due to hunting and loss of habitat. Game managers estimate that the entire population of wild turkeys in the United States was as low as 30,000 in the early 20th century. By the 1940s, it was almost totally extirpated from Canada and becoming localized in pockets in the United States, in the north-east effectively restricted to the Appalachians, only as far north as central Pennsylvania. Game officials made efforts to protect and encourage the breeding of the surviving wild population, and some trapped birds were relocated to new areas, including some in the western states where it was not native. There is evidence that the bird does well when near farmland, which provides grain and also berry-bearing shrubs at its edges. As wild turkey numbers rebounded, hunting was legalized in 49 U.S. states (excluding Alaska). In 1973, the total U.S. population was estimated to be 1.3 million, and current estimates place the entire wild turkey population at 7 million individuals. In recent years, “trap and transfer” projects have reintroduced wild turkeys to several provinces of Canada as well, sometimes from across the border in the United States.