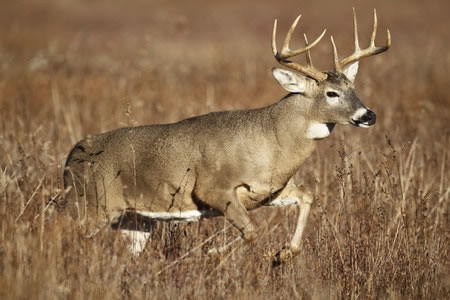 The white-tailed deer (Odocoileus virginianus), also known as the whitetail, is a medium-sized deer native to the United States, Canada, Mexico, Central America, and South America as far south as Peru and Bolivia. It has also been introduced to New Zealand, Cuba, Jamaica, Hispaniola, Puerto Rico, Bermuda, Bahamas, Lesser Antilles, and some countries in Europe, such as Finland, the Czech Republic, and Serbia. In the Americas, it is the most widely distributed wild ungulate.

In North America, the species is widely distributed east of the Rocky Mountains, but elsewhere, it is mostly replaced by the black-tailed or mule deer (Odocoileus hemionus). In western North America, it is found in aspen parklands and deciduous river bottomlands within the central and northern Great Plains, and in mixed deciduous riparian corridors, river valley bottomlands, and lower foothills of the northern Rocky Mountain regions from South Dakota and Wyoming to southeastern British Columbia, including the Montana Valley and Foothill grasslands. The white-tailed deer is highly variable in size, generally following Bergmann’s rule that the average size is larger further away from the Equator. North American male deer (also known as a buck or stag) usually weighs 60 to 130Â kg (130 to 290Â lb), but in rare cases, bucks in excess of 159Â kg (351Â lb) have been recorded. Mature bucks over 400Â lb are recorded in the northernmost reaches of their native range, specifically, Minnesota and Ontario. In 1926, Carl J. Lenander, Jr. took a white-tailed buck near Tofte, MN, that weighed 183Â kg (403Â lb) after it was field-dressed (internal organs removed) and was estimated at 232Â kg (511Â lb) when alive. The female (doe) in North America usually weighs from 40 to 90Â kg (88 to 198Â lb). White-tailed deer from the tropics and the Florida Keys are markedly smaller-bodied than temperate populations, averaging 35 to 50Â kg (77 to 110Â lb), with an occasional adult female as small as 25Â kg (55Â lb). White-tailed deer from the Andes are larger than other tropical deer of this species and have thick, slightly woolly looking fur. Length ranges from 95 to 220Â cm (37 to 87Â in), including a tail of 10 to 36.5Â cm (3.9 to 14.4Â in), and the shoulder height is 53 to 120Â cm (21 to 47Â in). Including all races, the average summer weight of adult males is 68Â kg (150Â lb) and is 45.3Â kg (100Â lb) in adult females.

Deer have dichromatic (two-color) vision with blue and yellow primaries; humans have trichromatic vision. Thus, deer poorly distinguish the oranges and reds that stand out so well to humans. This makes it very convenient to use deer-hunter orange as a safety color on caps and clothing to avoid accidental shootings during hunting seasons.

Males regrow their antlers every year. About one in 10,000 females also have antlers, although this is usually associated with hermaphroditism. Bucks without branching antlers are often termed “spikehorn”, “spiked bucks”, “spike bucks”, or simply “spikes”. The spikes can be quite long or very short. Length and branching of antlers are determined by nutrition, age, and genetics. Rack growth tends to be very important from late spring until about a month before velvet sheds. During this time, damage done to the racks tends to be permanent. Healthy deer in some areas that are well-fed can have eight-point branching antlers as yearlings (1.5 years old). The number of points, the length, or thickness of the antlers is a general indication of age, but cannot be relied upon for positive aging. A better indication of age is the length of the snout and the color of the coat, with older deer tending to have longer snouts and grayer coats. Some say spiked-antler deer should be culled from the population to produce larger branching antler genetics (antler size does not indicate overall health), and some bucks’ antlers never will be wall trophies. Good antler-growth nutritional needs (calcium) and good genetics combine to produce wall trophies in some of their range. Spiked bucks are different from “button bucks” or “nubbin’ bucks”, that are male fawns and are generally about six to nine months of age during their first winter. They have skin-covered nobs on their heads. They can have bony protrusions up to a half inch in length, but that is very rare, and they are not the same as spikes. Antlers begin to grow in late spring, covered with a highly vascularised tissue known as velvet. Bucks either have a typical or atypical antler arrangement. Typical antlers are symmetrical and the points grow straight up off the main beam. Atypical antlers are asymmetrical and the points may project at any angle from the main beam. These descriptions are not the only limitations for typical and atypical antler arrangement. The Boone and Crockett or Pope and Young scoring systems also define relative degrees of typicality and atypicality by procedures to measure what proportion of the antlers are asymmetrical. Therefore, bucks with only slight asymmetry are scored as “typical”. A buck’s inside spread can be from 3 to 25Â in (8â€“64Â cm). Bucks shed their antlers when all females have been bred, from late December to February.

Males compete for the opportunity of breeding females. Sparring among males determines a dominance hierarchy. Bucks attempt to copulate with as many females as possible, losing physical condition, since they rarely eat or rest during the rut. The general geographical trend is for the rut to be shorter in duration at increased latitude. Many factors determine how intense the “rutting season” will be; air temperature is a major one. Any time the temperature rises above 40Â Â°F (4Â Â°C), the males do much less traveling looking for females, else they will be subject to overheating or dehydrating. Another factor for the strength in rutting activity is competition. If numerous males are in a particular area, then they compete more for the females. If fewer males or more females are present, then the selection process will not need to be as competitive.

n the U.S., the species is the state animal of Arkansas, Illinois, Michigan, Mississippi, Nebraska, New Hampshire, Ohio, Pennsylvania, and South Carolina, the wildlife symbol of Wisconsin, and game animal of Oklahoma. The profile of a white-tailed deer buck caps the coat of arms of Vermont and can be seen in the flag of Vermont and in stained glass at the Vermont State House. It is the national animal of Honduras, and the provincial animal of Canadian Saskatchewan and Finnish Pirkanmaa. Texas is home to the most white-tailed deer of any U.S. state or Canadian province, with an estimated population of over four million. Notably high populations of white-tailed deer occur in the Edwards Plateau of Central Texas. Michigan, Minnesota, Iowa, Mississippi, Missouri, New Jersey, Illinois, Wisconsin, Maryland, New York, North Dakota, Pennsylvania, and Indiana also boast high deer densities. In 1884, one of the first hunts of white-tailed deer in Europe was conducted in OpoÄno and DobÅ™Ã­Å¡ (Brdy Mountains area), in what is now the Czech Republic.