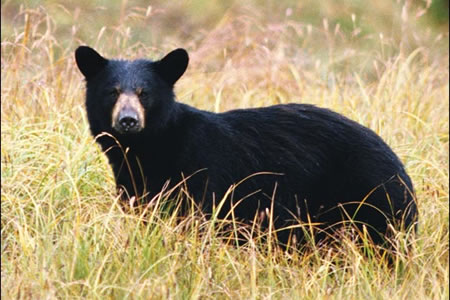 The American black bear (Ursus americanus) is a medium-sized bear native to North America. It is the continent’s smallest and most widely distributed bear species. Black bears are omnivores with their diets varying greatly depending on season and location. They typically live in largely forested areas, but do leave forests in search of food. Sometimes they become attracted to human communities because of the immediate availability of food. The American black bear is the world’s most common bear species.

It is listed by the IUCN as “least concern”, due to the species’ widespread distribution and a large global population estimated to be twice that of all other bear species combined. Along with the brown bear, it is one of only two of the eight modern bear species not considered globally threatened with extinction by the IUCN. American black bears often mark trees using their teeth and claws as a form of communication with other bears, a behavior common to many species of bears.

Although they live in North America, American black bears are not closely related to brown bears and polar bears; genetic studies reveal that they split from a common ancestor 5.05 million years ago (mya). Both American and Asian black bears are considered sister taxa, and are more closely related to each other than to other species of bear. Reportedly, the sun bear is also a relatively recent split from this lineage.

The current range of black bears in the United States is constant throughout most of the northeast, and down in the Appalachian Mountains almost continuously from Maine to north Georgia, the northern midwest, the Rocky Mountain region, the west coast and Alaska. However it becomes increasingly fragmented or absent in other regions. Despite this, black bears in those areas seems to have expanded their range during the last decade, such as with recent sightings in Ohio, though these probably do not represent stable breeding populations yet. Surveys taken from 35 states in the early 1990s indicate that black bears are either stable or increasing, except in Idaho and New Mexico. The overall population of black bears in the United States has been estimated to range between 339,000 and 465,000, though this excludes populations from Alaska, Idaho, South Dakota, Texas, and Wyoming, whose population sizes are unknown.

Throughout their range, habitats preferred by American black bears have a few shared characteristics. They are often found in areas with relatively inaccessible terrain, thick understory vegetation and large quantities of edible material (especially masts). The adaptation to woodlands and thick vegetation in this species may have originally been due to the black bear having evolved alongside larger, more aggressive bear species, such as the extinct short-faced bear and the still living grizzly bear, that monopolized more open habitatsÂ  and the historic presence of larger predators such as smilodon and the American lion that could have preyed on black bears. Although found in the largest numbers in wild, undisturbed areas and rural regions, black bears can adapt to surviving in some numbers in peri-urban regions as long as they contain easily accessible foods and some vegetative coverage. In most of the contiguous United States, black bears today are usually found in heavily vegetated mountainous areas, from 400 to 3,000Â m (1,300 to 9,800Â ft). For bears living in the American Southwest and Mexico, habitat usually consists of stands of chaparral and pinyon juniper woods. In this region, bears occasionally move to more open areas to feed on prickly pear cactus. At least two distinct, prime habitat types are inhabited in the Southeast United States. Black bears in the southern Appalachian Mountains survive in predominantly oak-hickory and mixed mesophytic forests. Â American black bears can be distinguished from brown bears by their smaller size, their less concave profiles, their shorter claws and the lack of a shoulder hump

Black bears are highly dexterous, being capable of opening screw-top jars and manipulating door latches. They also have great physical strength. Even bear cubs have been known to turn over flat-shaped rocks weighing 310 to 325 pounds (141 to 147Â kg) by flipping them over with a single foreleg. They move in a rhythmic, sure-footed way and can run at speeds of 25â€“30Â mph (40â€“50Â km/h). Black bears have good eyesight, and have been proven experimentally to be able to learn visual discrimination tasks based on color faster than chimpanzees and as fast as dogs. They are also capable of rapidly learning to distinguish different shapes, such as small triangles, circles and squares.

The average lifespan in the wild is 18Â years, though it is quite possible for wild specimens to survive for more than 23 years. The record age of a wild specimen was 31Â years, while that in captivity was 44Â years. Average annual survival rates for adult bears is variable, ranging from 86% in Florida to 73% in Virginia and North Carolina. In Minnesota, 99% of wintering adult bears were able to survive the hibernation cycle in one study. Remarkably, a study of black bears in Nevada found that the amount of annual mortality of a population of bears in wilderness areas was 0%, whereas in developed areas in the state this figure rose to 83%. Black bears were once not considered true or “deep” hibernators, but because of discoveries about the metabolic changes that allow black bears to remain dormant for months without eating, drinking, urinating, or defecating, most biologists have redefined mammalian hibernation as “specialized, seasonal reduction in metabolism concurrent with scarce food and cold weather”. Black bears are now considered highly efficient hibernators.

Although an adult bear is quite capable of killing a human, American black bears typically avoid confronting humans when possible. Unlike grizzly bears, which became a subject of fearsome legend among the European settlers of North America, black bears were rarely considered overly dangerous, even though they lived in areas where the pioneers had settled. Black bears rarely attack when confronted by humans, and usually limit themselves to making mock charges, emitting blowing noises and swatting the ground with their forepaws. The number of black bear attacks on humans is higher than those of the brown bear in North America, though this is largely because the black species considerably outnumbers the brown rather than greater aggressiveness.

Â The incidence of bear attacks in parks and campgrounds declined after the introduction of bear-resistant garbage cans and other reforms.
Compared to brown bear attacks, aggressive encounters with black bears rarely lead to serious injury. However, the majority of black bear attacks tend to be motivated by hunger rather than territoriality, and thus victims have a higher probability of surviving by fighting back rather than submitting. Unlike grizzlies, female black bears do not display the same level of protectiveness to their cubs, and seldom attack humans in their vicinity. However, occasionally, attacks by protective mothers do occur.
from Wikipedia.org
Wild Turkey →